Levi is not a special needs child. He is my son.

I read an article the other day that was shared by a friend on Facebook.  It was an experience a woman had with her son who has Down Syndrome.  A cashier at a store gazed upon her son and said “I bet you wish you had known before he came out. You know they have a test for that now…”  You can read the article here. I have to give the women credit. She handled the situation well by using her sarcastic wit.  There are many different ways this could have gone down.  If I were put in a similar situation, I am not sure I would have shown such restraint.

Her point is well taken.  She didn’t see her son as a disability.  She saw her son as her son.  This is exactly the same way I see Levi or my two girls for that matter.  Sure, there are many daily extra things we contend with such as therapies, stretching and putting on braces.  It can be difficult at first but eventually you settle into a routine.  Taking Levi to Therapy really isn’t any different than taking the girls to dance class.  It’s just something during the week that we do.

Levi’s Cerebral Palsy doesn’t define him. What defines him is his lovable personality.  That big smile he always has on his face.  His excitement and anticipation as he tries a new experience.  His love for the outdoors.  His little comedic side as he tries to make us laugh.  His love of music. He is just a sweet little boy and that is how we see Levi.
Posted by Unknown at 11:03 AM No comments:

Inclusion is a state of mind 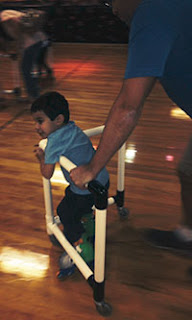 We recently took Levi roller skating as part of a school function.  You could see the excitement in his eyes as he walked through the door. Between the music and the lights and all that was going on, he was ready to take the night by storm.  We got him a pair of skates that fit over his shoes and braces.  Then we rented him a trainer which is a some PVC pipe in the shape of an L with wheels on the bottom.  This gives the kids something to hold on to that rolls while they are skating.  With that we hit the floor.

The first few minutes were a little a rough. Levi was throwing all his weight over the top of the trainer which made it top heavy.  I had to hold it down to keep him from going over the top.  His feet were everywhere as he struggled to keep his balance.  Finally we found a rhythm.  Levi would hold on to the trainer and lean back.  His feet would go forward just under the trainer.  He would lock his legs and that kept his feet nice and straight.  From there, I was just able to push him around the rink. He was loving it!

This was a major milestone for both of us.  Levi has worked so hard and come so far from a physical stand point.  He is now able to get himself into a standing position without holding on to anything.  He is able to stand unassisted for long periods of time.  And of course, he is now walking around the house.  He still holds on to things but in most cases, he doesn’t need to.  It is just easier for him.

For myself, I have come a long way in my thinking. In the past we have often gone back and forth on whether or not we should include Levi in something.  Should we take him to the latest kids movie?  Should we sign him up for sports?  We always struggled to predict what the outcome will be.  Will he sit still in the movie theater for that long?  What would he do when we stick him out on the soccer field? How will the other kids treat him? What we have learned is that we are usually completely wrong in our predictions.

One of Levi’s best attributes is his passion for life.   Carpe Diem!  Levi just wants to enjoy himself and take part in what everyone else is doing.  He lives to try new things and that is a really great thing.  If you stick him out on that soccer field will he even be able to kick the ball?  The answer is, who cares! It is not whether or not he will be able to play soccer, it is about him running around on the field with the other kids. Being part of something. Having fun and trying new things. At the skating rink, Levi didn’t care that he couldn’t skate.  He just enjoyed being out there. We really don’t know what he can accomplish until we try.  As a parent, I need to do a better job of giving him the benefit of the doubt.
Posted by Unknown at 10:59 AM No comments:

About The Levi Project

The Levi Project Community is a non profit organization here to support the families of special needs children through technology.

Our story begins with a lovable little boy named Levi. My son was born in February of 2010. There were no complications at birth and from what we could tell at the time, he was a perfectly healthy baby boy. A couple of days later we headed home with our newborn son...

About Levi AKA "Little Gonzo"

Levi is a very active, lovable little 5 year old boy. When he was just 8 months old, we discovered that he was not meeting his milestones. After a lot of testing, MRI's and doctor visits, he was diagnosed with a moderate case of Cerebral Palsy.

Levi has therapy several times a week and continues to make excellent progress. His legs are getting stronger everyday and we are hopeful that he will be walking in the very near future. Levi is eating better but we still struggle to ensure he gets enough food intake on a daily basis. His recent doctor visit showed that he finally made the curve for weight. I can't tell you how excited and relieved we all were.

Levi is the most amazing little boy. He is always happy and so curious about life. He LOVES to swim and is very attached to his Curious George stuffed animal. He is very determined and we know that will take him very far in life.

I hope you enjoy following the life of this very special little boy.