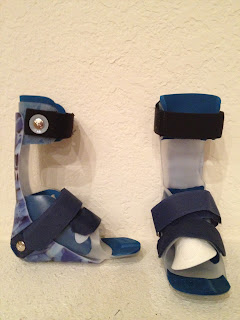 On Tuesday, Levi received a new pair of braces. They were recommended by the physical therapist as a way to keep him from walking on his toes.  This is a pretty common occurrence once the child’s legs become stronger.  His old braces just went above his ankle.  As you can see from the photo above, these braces will go about half way up his leg.
Day one with the new braces wasn’t without its challenges.  First of all, they are difficult to get on.  In order for them to be effective, his heel has to be completely flat.  He makes this difficult because he tends to fight us a little bit when we try and put them on.
Secondly, he keeps taking the right one off.  It is obvious that he doesn’t like them and they are probably a little uncomfortable.  Hopefully he will get use to them quickly.

Lastly, we figured out that we can no longer easily get him in or out of a restaurant high chair.  Since the braces come up much higher than the other ones, his legs don’t flex enough to get him into the right position.  So we need to either take the braces off or we are going to have to start putting him in a booster chair.  Sitting in a chair isn’t a problem for him.  It’s sitting in a chair for the entire restaurant experience.  If anyone has any suggestions, I am all ears.

Needless to say, Tuesday was a very frustrating day. Wednesday was more of the same. We were hoping to get some advice from the physical therapist but of course, she is out of town this week.


Caroline decided to speak with the occupational therapist at UCP during his Thursday appointment.  She said we were in luck because a representative from West Coast Brace (where we purchased the braces) was on site.  This gentleman, who has worked for WCB for quite some time, was happy to take a look at Levi.
He made some great suggestions.  First, he will be sending us a couple of pairs of these specially made knit socks. They will come up higher on his legs and act as a second skin.  He said WCB doesn’t usually push these as they are expensive. He is going to send us a couple of pairs for free.  He also recommended that we have an ankle strap added to the brace as his ankle pulls out when he walks. Finally, the top of Levi’s foot gets red from wearing the braces.  He told us to check and see if the redness goes away after 15 minutes once the braces are removed.  If it does, then he is fine.  If the redness doesn’t go away, it is creating a pressure point and we will need to look at other alternatives.  We felt very luck and blessed that the representative from WCB was on site today.  We really want these new braces to work out.


In all the drama surrounding the braces, Levi also received his first pair of Benix Shorts. These neoprene shorts are designed to keep his hips turned outward.  They really have the same purpose as the Thera Togs he was currently using.  One main difference is that these go on the outside of the diaper.  (You know where I am going with this.)  Also they seem a little easier to take on and off.  My only concern is that they are hotter and bulkier.  Hopefully he will get comfortable with these quickly as well.
I’m sure this isn’t the last time we will change things up.  Hopefully this process will become easier with each new experience.

About The Levi Project

The Levi Project Community is a non profit organization here to support the families of special needs children through technology.

Our story begins with a lovable little boy named Levi. My son was born in February of 2010. There were no complications at birth and from what we could tell at the time, he was a perfectly healthy baby boy. A couple of days later we headed home with our newborn son...

About Levi AKA "Little Gonzo"

Levi is a very active, lovable little 5 year old boy. When he was just 8 months old, we discovered that he was not meeting his milestones. After a lot of testing, MRI's and doctor visits, he was diagnosed with a moderate case of Cerebral Palsy.

Levi has therapy several times a week and continues to make excellent progress. His legs are getting stronger everyday and we are hopeful that he will be walking in the very near future. Levi is eating better but we still struggle to ensure he gets enough food intake on a daily basis. His recent doctor visit showed that he finally made the curve for weight. I can't tell you how excited and relieved we all were.

Levi is the most amazing little boy. He is always happy and so curious about life. He LOVES to swim and is very attached to his Curious George stuffed animal. He is very determined and we know that will take him very far in life.

I hope you enjoy following the life of this very special little boy.